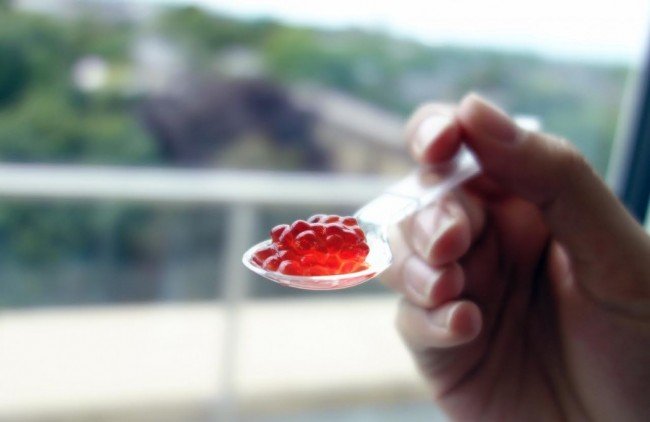 An apple a day may very well keep the doctor away, but this new fruit sensation owes its existence to doctors, not farmers.  Scientists at Dovetailed, based in Cambridge, UK, have printed fruit.  And they recently shared the fruits of their labor (pun intended) at the TechFoodHack conference.

“The new demonstration by scientists working at Dovetailed, the Cambridge-based company, used a process called “spherification,” which was originally discovered back in the 1950’s. Spherification allows scientists to use liquid or puree from a fruit and then form small spheres containing that flavour. The 3D printer can then combine those spheres with others containing different flavours, allowing for the production of unique flavour combinations into whichever shape or form is desired.”

Dovetailed is hoping the breakthrough will be a hit first with chefs interested in creating exotic new flavors in a variety of shapes.  They suggest the technology’s speed will allow rapid experimentation and hope that, as its costs drop, it will gain a wider user base.  Given consumer push back against genetically modified foods, it’s anyone’s guess as to whether people will warm to the idea of manufactured fruit – it certainly gives new meaning to the term “processed food.”

Food labeling requirements may be a challenge as well.  Right now, there are guidelines on the percentage (and form) of fruit required to call a product a preserve, jam or jelly.  One wonders what this new fruit product will called.