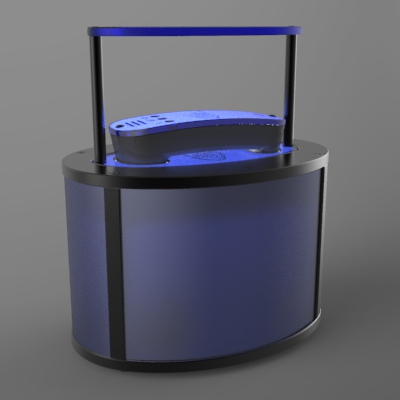 Some of our favorite projects involve printing models or prototypes for advertising campaigns.  Recently, we worked with Dennis Veatch, principal industrial designer at CreatID, who approached RapidMade about a unique – and challenging – assignment.  He had been commissioned to design and manufacture an exotic and complex phone system, the Bud Light Living Line, which needed to be fully functional – when the phone rings, its enclosure lights up and buzzes as a platform raises the phone so it can be answered.  Words cannot adequately describe it; you have to watch the videos to appreciate it.

Like many products we make, the BLLL (as we fondly call it) was produced using rapid prototyping and a hybrid approach of traditional and additive manufacturing.  One weekend, we printed a full-color model using CAD files and Solidworks, so Dennis could get Proof of Concept approval from his client.  Once the design was finalized, the prototype components were printed or machined and finished in just ten days.  Afterward, tooling for and production of parts for 22 units was completed less than three weeks later, allowing CreatID sufficient time to do wiring and assembly.

David Shapiro, Engineering Manager, played a key role in the project and observed, “This really showcased our ability to move smoothly from concept development to manufacturing. We were able to combine the strengths of additive manufacturing with those of traditional manufacturing to great effect. The grueling schedule originally worried us, but we actually delivered significant portions of the project early, much to the delight of everyone involved.”

Bud Light Canada’s campaign began airing this month.  In the YouTube videos, some lucky individuals literally get the call – and then the fun begins.  In one, Steve Aoki hosts a house party for the winner; in others, groups are whisked off to NYC, Las Vegas or Whistler – where an all-expense paid vacation awaits.  The buzz the videos generate has online viewers speculating where the Bud Light Living Line will show up next and how one can get the BLLL call.

Back here in Portland, we’re just stoked we got a call that allowed us to play a part in this cool ad campaign.