Could 3D Scanning and Printing Improve Splint Production and Fit? 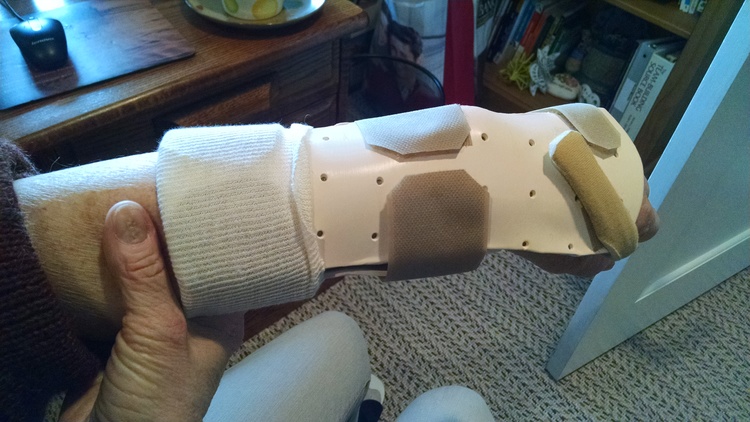 This week, I graduated from a soft cast to a hand splint, custom made from low-temperature thermoplastic and Velcro.  The process was an interesting mix of art and science.  My Occupational Therapist, who specializes in hand injuries, regularly creates them “while you wait.”

The procedure began with a gross sizing using a paper pattern placed against my arm to determine how much thermoplastic material would be needed.  After the two sheets were cut down, each was heated in a hot water bath and then carefully molded against my arm to obtain a form fit – a snug, protective shield whose edges roll away from the skin to prevent chafing.  Later the two splints were joined by a series of strategically placed Velcro strips.  Unfortunately, I encountered pinch points which prompted a return visit this morning… alas, as I type this post, I suspect there will be more tweaking needed.

So I find myself debating whether the fitting process could be improved using a 3D scanner and printer.  Theoretically, a doctor’s staff could quickly scan the patient’s hand in the office to create a model that could then be used to make the splints.   The final fitting would then be completed during the first OT appointment, allowing the patient to begin therapy during the initial visit instead.

But would the additive manufacturing approach be much more accurate than the current in-office process?  I suspect it might be more expensive (but I won’t know until I get the bill) and since the splints are only worn (hopefully) for about four weeks, insurance companies might not approve.  But given how tender the injured body part can be, anything that minimizes the amount of handling required during the fitting would be welcomed.