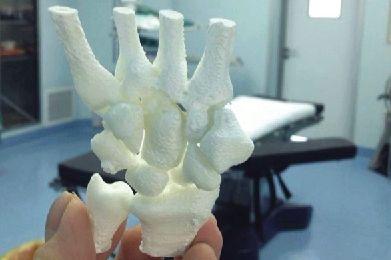 Having recently endured wrist surgery on New Year’s Eve, I was pleased to see this story (and not just because RapidMade prints 3D models)..

Doctors have again turned to 3D modeling and printing to assist them in a challenging surgery.  This time, it was to fix a wrist injury which, unlike mine, couldn’t be routinely repaired.  A university student broke his hamate bone and fourth Metacarpel  – a complication that created difficulties.

Dr. Rong’s team took images from the patient’s CT scans and used them to print the model pictured above.  Having an exact replica of the broken bones, the surgeon was able to plan the surgery in advance which reduced operating room and anesthesia times.  Shorter surgeries save hospitals money and less anesthesia improves patient outcomes.

Personally, I’m looking forward to widespread adoption of this technology…  My own surgery took longer than planned because my wrist was worse than expected – there were bone fragments that had to be removed.  As a result, the anesthesiologist had to fully sedate me, and I ended up spending New Year’s Eve in the hospital – not a Happy start to 2015, so while I hope to never go through a similar procedure again, I’m heartened by the adoption of 3D printing.